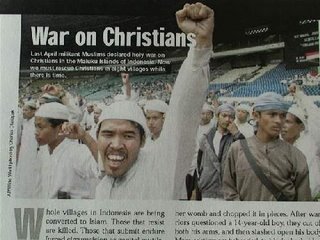 According to TIME magazine, the terror group ISIS has released another video of how its operatives targeted and beheaded Ethiopian Christians in Libya.

This is not the first time that ISIS, a terrorist organization that is obviously of Muslim affiliation has proudly and daringly released a video of its atrocious acts against unprotected Christians.

Since the rise of ISIS in the Middle East and Boko Haram in Nigeria, Muslim terrorism against Christians has been on the rise. If they are not bombing them in churches, they are killing them in their towns. Recently we saw how Al-Shabaab, another terrorist organization of Muslim affiliation that operates in East Africa attacked a university in Kenya and singled out 147 Christians for kill while sparing their Muslim brothers. The stories are endless and are both heartbreaking and frustrating.

The stories are frustrating because world powers especially the seat of world power – the White House is doing nothing about it. Rather than call it what it obviously is, at the least (a war by Muslim terrorists against Christians), President Obama rather chooses to pick a fight with people calling it what it exactly is. What cowardice. And the terrorists listens. And the terrorists get emboldened. They are killing in the name of religion, Mr. President. They are Muslims. And they are killing Christians. And what does that add up to, Professor Obama?

Christians are dormant these days. Preachers misread the New Testament and drive down passivity and liberalism down the throats of their congregation. They will amplify “turn the other cheek” and de-emphasize the part where Jesus Christ got violent with those “turning my father’s house into a den of robbers.” They will tell you to forgive your enemy 70*7 times without even caring whether you will be alive at the 70th time if your enemy persists at mistreating you. And they will tell you that the Mosaic law of an eye for an eye is an old-fashioned Old Testament practice that has been outlawed by the death of Jesus Christ. What naiveté. By the time you get through with a church service these days, you will be convinced that every attempt by your enemy to kill you is God trying your faith and if you do not allow your faith to be tried by fire, you will not inherit Heaven!! Bunch of bollocks!!! And clueless congregation will walk away like sheep shouting hallelujah. And swimming in the water of apathy while Muslims, having accustomed themselves with our dead faith, take advantage of it and ravage the world, killing us with impunity. It is time this rubbish stops. By the way, faith without action is a dead faith.

If Muslims want a religious war with Christians as recent global occurrences suggests, isn’t it time Christians throw away the decadent old liberal appeasement delusions and the “GOD is in control” mantra and give them war?

At what point of these killings do we say to hell with turning the other cheek?

At what point will the Obama Administration and the wave of liberal media stop toying with vocabulary and call these affront what it is – a challenge for an all-out religious war?

And why are we afraid of that fight?

What do Muslims have against us that scare us so much from answering in equal proportion, their religious terrorism against Christians, or at the least calling it by its name?

When the Ku Klux Klan, a white terrorist organization that typical of all terrorist organizations believe they have the license to kill whoever they want but are themselves too sacred to be touched, were killing African Americans in their numbers, nothing much could be done about that. Simply because the white supremacy ideology they were promoting resonated with so many white people in position of power who had the authority to bring them to justice. But who for the already stated reason chose not to. Please watch History Channel’s America’s Book of Secret. This claim was made on Season 2, Episode 3. And the Black man had neither the political nor economic power to seek redress. But that cannot be said of the current Muslim aggression against Christians.

In today’s world, if a religious war should break out between Muslims and Christians, do I need to tell you how that war will be easily won by Christians?

I am not a religious-biased person. I have worshipped in a synagogue, I have worshipped in a mosque, and I worship in a church. It is important to me that I get to appreciate the perspectives of each religion so that I will know how to better address issues that are of importance to people’s faith. I love my Christian brothers as well as I love my Muslim and Jewish brothers. And I have met good people from each of these religions. But I have also been around an acquaintance that happens to be a Muslim. One day I asked him what would be the fate of our relationship if religious conflict should break out in our country? I was living in Nigeria then. And he didn’t mince words and he didn’t even ponder for a second before telling me that I would be the first person that he will kill if such a religious conflict breaks out. Without me posing any form of danger or harm to his person. Simply because he is a Muslim and I am a Christian. Despite our fraternization. And that gave me a cold chill.

There is something fundamentally wrong with a religion that teaches that kind of behavior. And excuses should no longer be made for such religion.

When an errant child start causing a problem between his parents and their neighbors, it behooves the parents, for the sake of peace, for the sake of civility, and for fostering-mutually-beneficial-relationship sakes, to call their errant child to order. And I implore Muslim leaders all over the world to stop hiding behind rhetoric anymore, but to take pragmatic actions to put an end to these religious madness as they witness them taught in their mosques and madrassas. Because the next president of the United States and the leader of the free world will not be as benign to these religious acts of war as the current one.

I am passionate about politics and the social challenges that faces our country. As a firm believer in the goodness of man, and at the risk of sounding naïve, I am convinced that when people of goodwill driven by gallant ideas come together to fashion out a better world, and pursue these ideas with energy and vigor, that somehow they will prevail. My blog will seek to provide a platform through which these gallant ideas can be birthed for a better and equitable world. View all posts by Ezeocha Post